VATICAN CITY  –  As the Catholic Church of America eagerly awaits the arrival of Pope Francis next week, speculation as to the “true meaning” of his visit has left many prominent members of the financial sector, skeptically apprehensive.

The celebrity psychic and head of diplomatic relations to Heaven, will arrive amid the most expensive sex-scandal since  –  well  –  forever. Following revelations surrounding the number of sexually abused children since 2000, the church has dish out more than $3 billion dollars, into a series of lawsuits and criminal prosecutions over child sexual abuse by Roman Catholic clergy, on top of record breaking amounts of moral teachings and judgment, in the U.S. alone. These figures have led certain experts in church accounting and finance, to warn that when Pope Francis gets here, he could be looking for a “Biblical Bailout”. 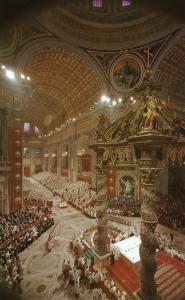 Vatican Bishops have largely scoffed at the claims, reminding the public that “We are quite a wealthy church. We really are rather exceptionally rich. Most people have no idea, the tremendous amount of property we own. Even as the world stumbles through the worst financial crisis in many lifetimes, we who are deserving, receive gentle salvation. We are the victors, not the victims.”

The Economist magazine estimated spending by the Catholic Church in 2010 at $170 billion per year. Estimates put the number of abused american minors by 2012, at 100,000. At $3 billion to date, that settles the average cost for sexual abuse by Catholic clergy at about $30,000 per victim. Meaning that at the current cost of Catholic child abuse, the church can only afford 5,666 victims per year before they break their Vatican bank.

So  –  Does the Pope need a Biblical Bailout? The incidentally thinks, probably not. We’re just asking.

Incidentally  –  The Incidentally is notoriously bad at mathematics and statistics. If you have spotted an error in our calculations and you’re not a Pope, we eagerly await your corrections.

View all posts by Lemont Furnace

Accidentally Recommended by our Readers